It is about race (what has been created by whites) – skin color broken down to be construed by humans as a privilege or curse.

Humans have always practiced greediness, selfishness and an unrelenting desire to gain power over others. But, this world has been shown the white men who hold power and his servants lack morality – principles concerning the distinction between right and wrong or good and bad behavior.

The only way to a better world is to totally dismantle this racial caste system. 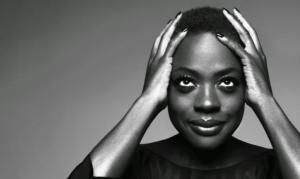 Viola Davis has made history during the 67th annual Emmy Awards (that many year’s and this is the 1st), becoming the first black actress to win the Emmy for Outstanding Lead Actress in a Drama for her role as Annalise Keating on ABC’s How to Get Away with Murder.

In her acceptance, speech – she quoted Harriet Tubman:

You cannot win an Emmy for roles that are simply not there.”

This country, this world has a history of hatred, an unwanting for people of color to shine the way God intended. Viola Davis is Black Excellence, she is a shining light in a world of darkness.

Europeans / white people have “colonized” (brought upon terror, murdered, raped and occupied) all lands across the world. The things that are Black, the many things we have created has been stolen by whites for their own personal and monetary gains.

Don’t let media / capitalism poison you and your children’s minds for the conquering by those who’s ancestors and down the bloodlines created a country / world governed by evil.

The history and present day terror forced upon our ancestors and now us.
The United States original terrorists still walks the streets, he still is sitting in congress seats, he is still teaching our children lies.

The racist terror given at the hands of white people, the white people of this country who have sold their souls to a fallen angel named the Devil.

You are NOT forgiven for all the atrocities you’ve committed against my people across the world – may you eternally burn in hell.

Just to be clear – I am a Back & white mixed woman living in the United States – Los Angeles.
I love my white Mother – she is one of the kindest, giving and loving person’s I have ever known. She is part of the group of white people who sees color (doesn’t say that ignorant things like, I don’t see color). We do come in different colors, and most Black proud people want to be seen as Black.

Now I am not saying Black men don’t go after these non-black women as well. The images which have been fed to us via media – you know – European standards of beauty to which comes the lighter skinned and straight weaved, mixed group of blacks who are thought as to be the more attractive – acceptable by (white) society. This unfortunately has made some Black males regard Black in its natural form is not attractive.

When we were in Africa we were Queens and were the most sought out women. The Black women and men were the original and chosen one’s of this world – by God. We have to teach our children the greatness in which we come from. We birthed this world, including Europe and Asia.

The True Identity of the Hebrews Part 1 of 7:

Short interview by a professor I know from University of Irvine in Southern California with the one and only Yasiin Bey.

Recorded in Paris, this short for the exhibit “Return of the Mecca: The Art of Islam and Hip-Hop” features excerpts from an interview between Yasiin Bey (aka Mos Def) and curator Sohail Daulatzai, as well as music by Oddisee, and art work from the exhibit which includes Jamel Shabazz, Ernie Paniccioli, B+, Cognito, Katina Parker, Coleman, Nema Etebar and more.

A black man who’s stopped by the police discovers that there’s a way to escape racism. The truth about being a black man, minding your own business and how the world around our communities views blacks.

A humorous way to hear the undeserved circumstances blacks face in America.

The list of talent who collaborated with Kendrick Lamar on this timeless album that will forever be a staple in hip hop.

The animated film Bilal is inspired by the true story of Bilal Ibn Rabah, a freed slave of Ethiopian origin who converted to Islam and became a trusted companion of the Prophet Muhammad after his emancipation. Impressed by Bilal’s sonorous voice and unwavering faith, Muhammad handpicked him to call Muslims to prayer as Islam’s first muezzin. Bilal’s descendants are also believed to have established the Mali Empire’s Keita Dynasty.

Bilal was a black slave, almost certainly the son of slaves, and is believed to have been from Abyssinia (now known as Ethiopia).  Being born into servitude, he probably never expected life to offer him more than hard work, pain and drudgery.  However Bilal walked the earth at a very momentous time.  He was a slave in the city of Mecca when an unlettered man began to call the people to worship One God.  This man was Muhammad, the Messenger of God, may the mercy and blessings of God be upon him, and his message was for all of humanity.

universalmindset
Create a free website or blog at WordPress.com.