Head wrap worn in the video from https://thewrap.life

It is quite frustrating when the same Black men we defend, betray us. 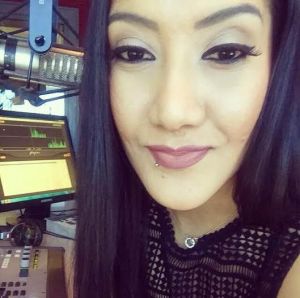 I had a chance to listen to the station and Ms. Fel during my last two trips to Arizona and wanted to reach out to this young lady to get an inside scoop of the radio business and her experiences. I had a few questions and she was totally open to an interview.

Q. Are you from Arizona, and if not, what brought you to the beautiful desert state?

Q. Prior to working at Power 98.3, did you work at any other radio stations?

ThatGirlFe: Power 98.3 is the first & only radio station I have worked for, so far.

Q. How did your career start off in the music radio business? Was it through internships or were you lucky enough to know someone to bring you right in?

ThatGirlFe: It helps if you do know someone but most people, myself included, start off by doing an internship. There’s no money involved just school credit but the experience u gain is all worth it. Plus you get to meet some cool people in the industry.

Q. What inspirational advice would you give to those out there looking to break into radio?

ThatGirlFe: The best advice I could give someone who is trying to get into radio is, APPLY for an internship! If you’re going to a school then ur already halfway there. You don’t have to take radio related courses, you just have to make sure it’s ok with your school if u can earn school credit by working for a radio station. And once u get the internship, be ready to work hard and show them you are there for the right reasons, not just to meet celebs!

Q. Who is your favorite artist you’ve interviewed and/or met so far?

ThatGirlFe: So far the coolest person I’ve interviewed would probably have to be Ne-Yo. Mostly because he just had a great personality and had great answers to my questions. This was back when he was going to be performing at one of the Arizona Jazz Festivals. And as far as the coolest person I’ve met, most artist or “celebrities” are really down to earth people. They are so regular when they are right in front of u but I do remember looking at Alicia Keys’ nose and eye make up as she was talking to me. I didn’t hear a word she said because I was thinking to myself how cute her nose & make up are. Lol! Rihanna one time asked me if my lip piercing hurt because she was thinking about getting something like that. Her & her people convinced me to take a picture with her. I didn’t want to because I went to work looking busted. Lol! I told myself I would always get ready for work after that. But I tend to get along with and communicate with one of my all time favorites the most, Miss Mya. She is my Beyoncé. So she would probably have to be the coolest person I met. Lol! Plus she sang Happy Birthday to me one time! 🙂

Q. Is this your last pit stop, your “I’ve accomplished my dream”, or do you have plans to move through different and even higher channels within the radio business?

ThatGirlFel: There was a time when I was doing part time radio and still working at a regular 9-5 where I questioned if I still wanted to do this radio thing. It was taking soooo long for me to get a full time position and bills still needed to be paid. But I thought ahead and knew I would miss it if I left it completely. So I kept doing it part time and one day someone believed in me! Obtaining a full time position was good enough for me. I love my job & my city but I would be cheating myself and everybody that believes in me if I didn’t pursue a better opportunity if ever one came my way! 😉
Be sure to tune into Power 98.3 with ThatGirlFel Middays 10a-3p PST or on the web at http://power983.com
& follow @thatgirlfel on Instagram|Twitter

This past Sunday February 22nd, 2015 I attended this inspirational event.

Alongside Karen Civil, these three spoke about their past experiences, how they made positives out of negatives and the sacrifices needed for true success. Miss Civil, going the most in debt to shed light on all the things this young black woman has accomplished, how she got there and that her journey is still in progress.

Rapper Meek Mill and songstress SZA (as photographed) stopped by the event to show support!

I had the pleasure of having a front row seat to this event and look forward to see more from and hopefully one day work with Karen Civil.

The United States government murdered him, but his legacy will never be forgotten along with all the other Black names unspoken in the struggles of racist oppression. Civil rights has been a never ending fight for laws that still hold Blacks in shackles.

Born in New York circa 1797, Sojourner Truth was the self-given name, from 1843 onward, of Isabella Baumfree, an African-American abolitionist and women’s rights activist. Truth was born into slavery in Swartekill, New York, but escaped with her infant daughter to freedom in 1826. Her best-known speech on racial inequalities, “Ain’t I a Woman?”, was delivered extemporaneously in 1851 at the Ohio Women’s Rights Convention.

While I scroll through my Facebook and Instagram feed, I see posts dedicated to Joan Rivers. But while my fellow friends are saddened by the death of this woman, I am questioning their feelings…

TMZ: And we should be thankful for you.

Joan : Be thankful that we’re all living in America and stop everybody getting so damn uptight! And this goes for the Indians — both dot and feather!

Rivers was spotted at Los Angeles International Airport after she had disembarked from a flight and was asked by a TMZ reporter about the ongoing conflict in Gaza.

“Good,” Rivers said when questioned on how she felt about the thousands of civilian Palestinians who have died during recent fighting in the warzone.

“This is the most numbers percentage-wise of civilian deaths,” the reporter told Rivers.

“Who cares?” she responded, later adding, “At least the ones who were killed were the ones with very low IQs.”

This dehumanization of Palestinians goes hand in hand with the hatred/racism of black and brown people. I am not going to downplay her attributions to women in breaking lines within the entertainment business, but this does not change to mindset she held with non-white people. It is hot news right now regarding Rivers death, but we must not forget all the lives lost at the hands of her male counterparts (U.S. government / it’s history of oppression which has fed the minds of so many).

With that said, R.I.P. to this true Hollywood bi**** who was funny at times, with her plastic self.

The song xx video that captured me from the beginning w/ this artist
Many Moons: https://www.youtube.com/watch?v=LHgbzNHVg0c